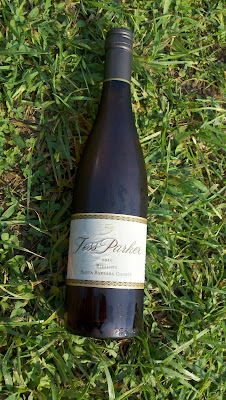 I am trying something new...
Blogging from my phone since recent storms have displaced me from my home...
...and my INTERNET! Still, Disney magic continues and I am going to deliver!

Have you heard of Fess Parker? Whether you know his name or not, I bet you know the character who made him famous! Davy Crockett! Kids still don those coonskin caps to this day as they pretend to be a mountain man, larger than life, full of decency, but bent on not trusting authority. Walt Disney hand picked Fess for this role that still lives on in Magic Kingdom and other Disney places such as Crocketts Tavern at the Fort Wilderness Resort and the Davy Crockett Ranch in Disneyland Paris!

Fess Parker had other ventures in television until he settled in California and started his own winery. Today, it is a beautiful estate complete with resort and spa! My personal favorite is his Riesling. I first tried it at the Wave restaurant inside Disney's Contemporary Resort.

Fess Parker passed away in 2010, but his legacy lives on in Disney Parks as well as in the Fess Parker Winery now run by his son.